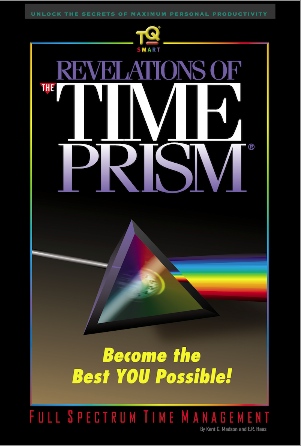 Order The Power of TQ

A made-to-order, 172 page book containing a personalized, 100 point performance assessment and eye-opening evaluation — guaranteed to fast-track your career, and your life.

Real Story Of The Week... "Real happiness is not dependent on external things. The pond is fed from within. The kind of happiness that stays with you is the happiness that springs from inward thoughts and emotions. You must cultivate your mind if you wish to achieve enduring happiness." ~ William Lyon Phelps

Loraine, a 45 year old divorced woman with a 10 year old son (diagnosed with full-blown ADHD) is an industrial engineer living in a city she hates... working at a job she hates... in a male-dominated political climate she hates... at a plant in the slums of Mexico she really hates. Worse, she knows she is paid about $25,000 a year LESS than a man she works with—10 years younger than her—who has been with the company for only six months. Her blood boils every time she sees this guy.

To make matters worse, there have been 3 drug-related shootings within a half mile of the plant gate in the last 4 months—and 9 gang-related drive-by killings in the last year. She hates getting into her car and driving across the border, because she and her car are searched entering and exiting the country every day. She hates the hot, dirty climate mostly because she was born and raised in Michigan where there were actually 4 seasons—instead of two: hot and dusty... then hotter and dustier.

For the last 4 years, things have been going downhill personally for her. She desperately wants a man in her life, but never makes it past a second date. By her own admission, no one measures up, and the prospects look very grim, as the local "gene pool" has been severely contaminated!

To say she is miserable would be a colossal understatement!

Having gone through the Values exercise during a TQ Quick Start Coaching session, she told the group that her values were: faith, family, love, charity, freedom, spirituality and a number of really "airy fairy" words that she thought people wanted to hear—rather than get down to her Authentic Self—the real person walking around in a lifeless body named Loraine. When we challenged her values against her circumstances, she broke down and cried—unable to relate any of her values to her life.

She admitted that she picked her values on what she wanted people to think about her, rather than take the time to determine her own. When we asked her how she reconciled her 5th most important value (freedom) with the shackles she was wearing, she broke down again. It got worse when we pointed out that her 2nd value was family, and asked how her son was reacting to the obvious misery she was bringing home from work each day. Did he sense his mom's terminal frustration with her life—and how was that affecting him? Terrible was her answer. She felt terribly guilty

. The killer part of this story was when she told the group that the only thing that was keeping her going was her benefits package—that she lives frugally—and had managed to sock away $800,000 for her retirement!

Are you starting to see the disconnect?

Loraine has allowed values conflict and confusion to destroy her life. She feels helpless and hopeless because she is rationalizing her sorry existence based on the wrong criteria, the wrong priorities and the wrong vision. Getting her to the Starting Point for success was quite easy—and best of all, painless.

We advised Loraine to take a long weekend by herself to do the work in the Values chapter for real. To determine her authentic values. Not some pie-in-the-sky values that she wants people to think she has, but start with the honest-to-God truth about who she is... starting with the fact that she values MONEY more than her son, her happiness and her peace of mind.

At first, she denied that she even valued money at all, but couldn't seem to argue against the case that she has more than enough financial resources to do whatever she needed to do. Reluctantly, she finally moved financial security onto her list.

The more she thought about it, she could see that she was very money motivated—and preserving what she had was causing her serious problems with men. She was driving good men away because she thought that they would steal her money—even though they had no clue how much dough she actually had. She just knew men were bad—out to get her and take her for all she was worth. Very sad.

Loraine finally determined that, indeed, financial security was her number one value, and that family was number two. In her mind, she was poor and that she had virtually no options. When we asked her how much more time she was willing to put up with her desperate existence, and how much more money she would need to feel financially secure, the breakthrough happened.

We told her to pick a number, and once she hit it, she could focus entirely on her FAMILY. How much was enough we asked? A million dollars... two million... more?

Would she be willing to trade her only life on four more years of misery for accumulating another $100 grand? Which do you really value we asked? The money, or your freedom? Your money or your family?

Choose that which is MOST important to you.

Almost instantly she got it and said, "I have more than enough security—I want a better life for me and Bobby." She was now totally clear on her number one personal value: FAMILY. She saw that she had enough money to find a job wherever she would be happy. She moved her environment up to number two, and acted on her third: faith.

Yes, it was time to put her faith in action—to have the courage, conviction and belief that what she was about to do was the right thing to do. She not only believed, she committed herself to a Natural Mission and specific course of action that could be stated in just one word: Move!

When we advised her that everyone has a "geography" of the heart—a true place for them to be—she got it instantly. We told her to figure out what kind of person she was: desert... plains... mountains... lake... river... stream... ocean... city... country... etc. Without hesitation she said, "NOT the desert—I hate the desert!" Laughing, we reminded her what the late great comic, Sam Kennison always said "Get out of the #@%&*# desert... leave... there is no food in the desert! If you want food, get out of the #@%&*# DESERT!!!"

She had always loved the mountains. In a way, they constantly called her. Loraine said she loved the mountains where the seasons changed... maybe Seattle... or Denver... or back east. VISION: Mountains with Christian men and a great job would be perfect.

To accomplish her new "Get out of the Desert" Mission, she created a brand new ROLE and instantly became a JOB SEEKER. In less than 48 hours she had 3 headhunters calling with POSSIBILITIES and POTENTIALITIES. One company liked her track record (and new-found enthusiasm on the phone) and they even flew their corporate jet down to pick her up—and take her to Colorado Springs for an extensive interview. Her credentials matched both HER interests and their issues perfectly, so they hired her on the spot and gave her a juicy relocation package.

Vision: She and her son happy living in the mountains with a wonderful job in the fast growing field of Nano Technology... and Bobby doing well in a great private school.

How strongly do you relate to Loraine's case study? Is your life "filled with the sound of fury and signifying nothing?" Are you an emotional wreck because you have Values confusion and conflict?

Give some thought to the broad issues we raised and how they might apply to something going on in your life right now.

Take a moment to journal your thoughts here

Got something to say?

We want your thoughts, but you must be a member of ThinkTQ.com to comment on these stories. Please register or sign-in. 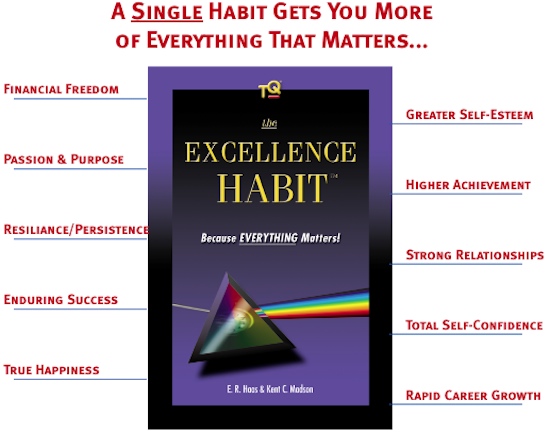 You've heard of the 7 Habits of Highly Effective People, but what you might not realize is that there is a SINGLE habit responsible for high achievement: The Excellence Habit™.

This habit is the source of Leadership excellence... high self-esteem and confidence... mental toughness... and the will to succeed in the face of adversity. The good news is that you can develop it in just 100 days flat!

You will learn to THRIVE not merely SURVIVE.

If you are serious about personal development, take a moment to learn more about our 100 Day Excellence Habit™ Challenge.

This is simply the fastest and easiest way to learn, remember and master the success-critical skills you need to thrive.

"There are countless ways of attaining greatness. But any road to reaching one's maximum potential must be built on a bedrock of respect for the individual, a commitment to excellence, and a rejection of mediocrity."— Buck Rodgers, IBM 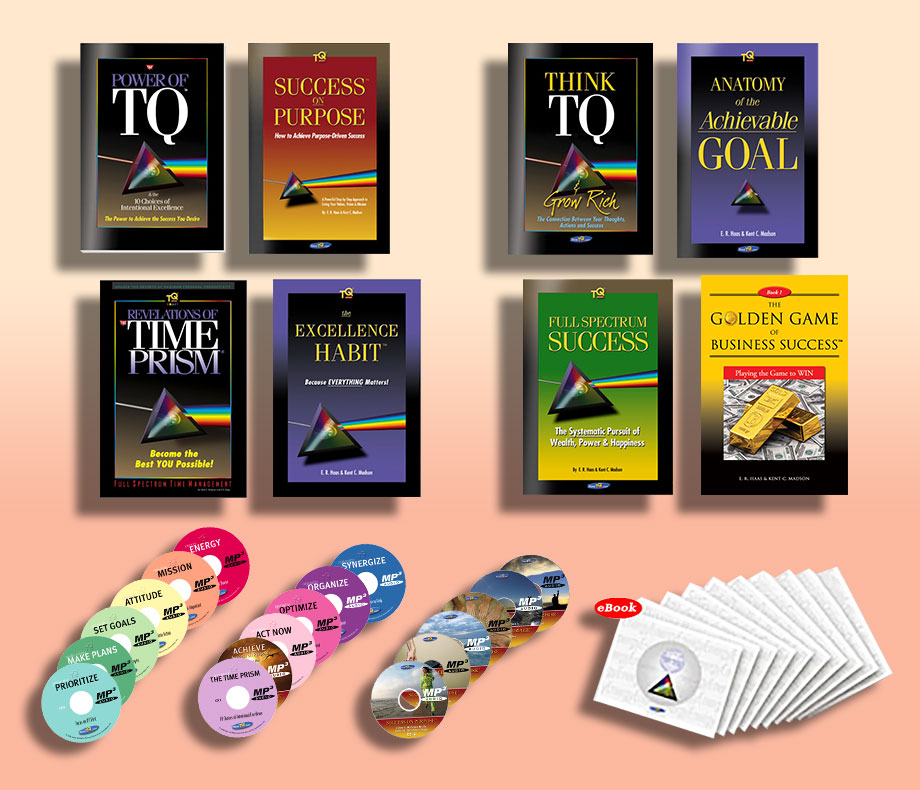 That's not all! To see more of our current product promotions and discounts, visit our special offers page.